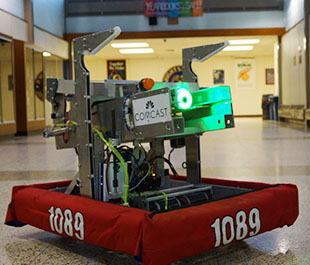 Brief Description of game: ULTIMATE ASCENT is played by two competing alliances on a flat, 27 x 54 ft field. Each alliance consists of three robots. They compete to score as many discs into their goals as they can during a two (2)-minute and fifteen (15)-second match. The higher the goal in which the disc is scored, the more points the alliance receives.

The match begins with a fifteen (15)-second Autonomous Period in which robots operate independently of driver inputs. Discs scored during this period are worth extra points. For the remainder of the match, drivers control robots and try to maximize their alliance score by scoring as many goals as possible.

The match ends with robots attempting to climb on pyramids located near the middle of the field. The robot earns points based on how high it climbs. For more information on the game visit usfirst.org.

Frame/Drive System: This year we decided to use the “Kitbot on Steroids” again. This decision allowed us to begin building the robot while the individual systems were still being designed, saving us a lot of time. We lowered the center wheels of the 6 wheel tank drive to help with turning. This drive system uses 2 MINI TOUGHBOX gearboxes with 2 CIM motors each and drives the front and middle wheels directly (and rear wheels indirectly off the middle wheels).

Manipulator: This year’s robot featured a two-wheeled shooter, tilted by a lead screw, to fire the disks up to approximately 60 ft. It is fed by a deployable chute mounted to the back of the shooter frame. The disks were “flicked” into the shooter wheels by a pneumatically powered “finger” made of 1” square tubular aluminum. The robot also featured twin static climbing arms. These were designed with the help of drawings from our friend s at Team 2016. With this system, the driver simply had to drive into the pyramid to score 10 climb points, and could achieve the climb in less than a second.

New Concepts: This year’s game forced us to explore complex physics, including the effects of compression upon energy transfer. After a large amount of research, a new aspect to our design process, we found the necessary equations for Frisbee flight mechanics. We based our shooter and turret off of the variables from our research in order to be able to control every aspect of the disc’s flight. We also opted for a new battery mounting technique that proved to save a lot of space. Our greatest breakthrough was the use of a combination of cotton buffing and Nitrile wheels to maximize grip and force applied to the discs.

Components Discarded: Due to the difficulty of this year’s game we spent more time prototyping than usual; as a result we had a large number of designs that were discarded. Several shooter designs and a non-static climber were among the casualties. These designs were replaced by the simple and highly effective systems that were implemented. Even our “finalized” designed was not safe from change, we discarded our 10 inch cotton buffing wheel in exchange for a superior Nitrile wheel, once again courtesy of Team 2016.